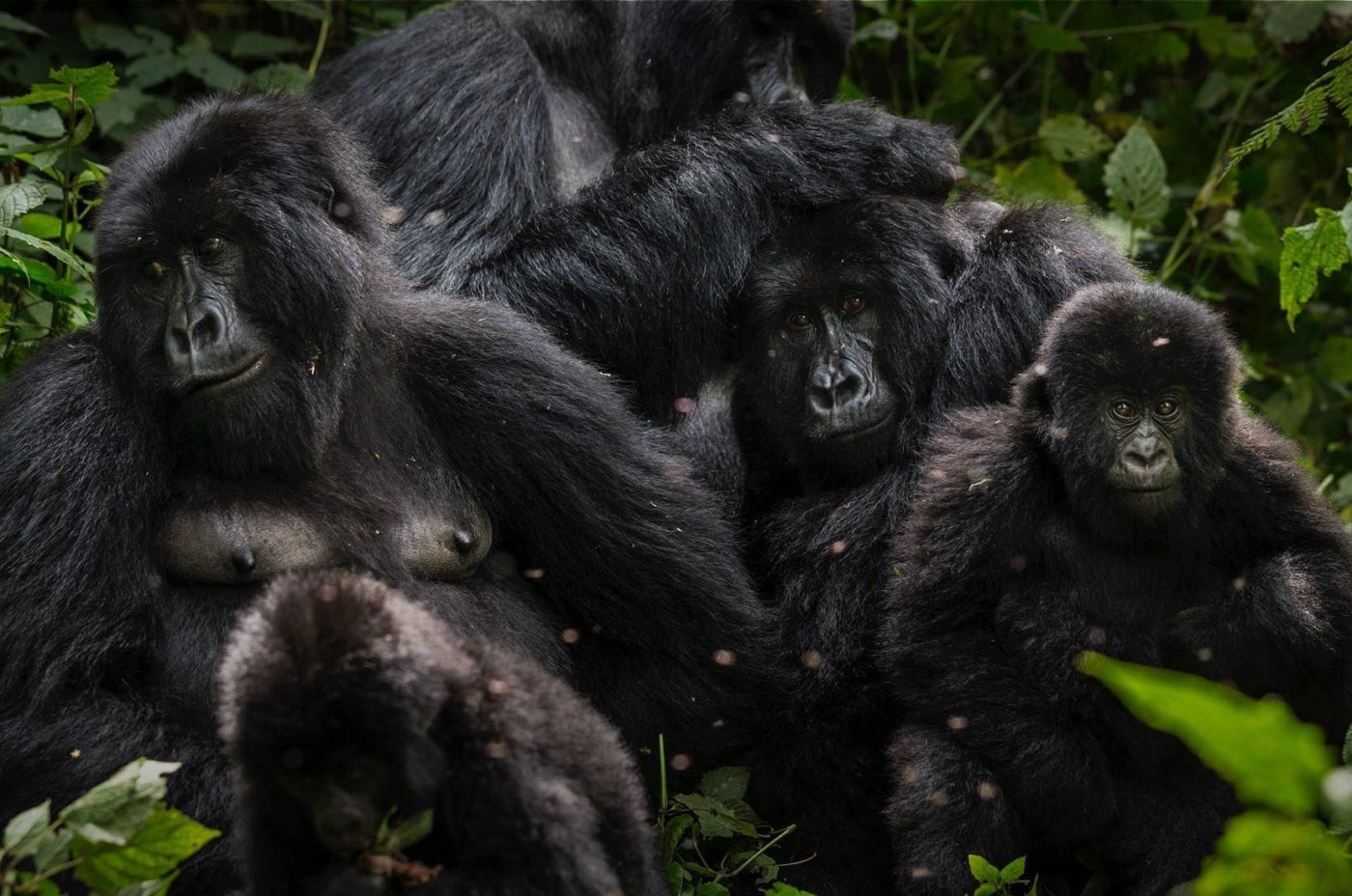 Of the many gorilla families that roam the Virunga Mountain Range, there are ten that have been habituated and can be visited by tourists as part of challenging ecotourism treks.

Mountain gorillas live in family units, also known as troops, led by a dominant male silverback. While there may be other silverbacks within a troop, all gorillas are subordinate to the dominant silverback, who directs troop activities and retains mating rights over females. Mature females regularly migrate between families to improve reproductive chances and avoid inbreeding.

Habituation and its Benefits

Mountain gorilla conservation would be challenging without habituation. This painstaking process involves Rangers and trackers gradually increasing the duration and proximity of troop visits until the gorillas no longer perceive human observers as a threat. Age, sex, and unique noseprints are then logged as part of the identification process. Once established, names are assigned, each in memory of one of Virunga’s fallen rangers. A troop is normally fully habituated after two years, at which point tourist groups can visit.

Since it began in 1994, habituation has allowed researchers to observe how mountain gorillas affect their environment and better understand behaviour for the purpose of improving conservation efforts.

It is also critical for tracking births, deaths, migrations and silverback clashes, which can lead to the superseding of dominant males or the division of troops.

Aside from monitoring behaviour and family dynamics, daily visitations allow individual health issues to be identified and illegal activities to be detected and brought to the attention of park rangers.

All in all, habituation has supported healthy population growth of mountain gorillas, a sub-species that is central not only to healthy ecosystems but Virunga’s conservation and developmental aims as well. In 2020 alone, there were 17 births within the park, and with similar successes in neighbouring Rwanda and Uganda the mountain gorilla has been reclassified from critically endangered to endangered by the IUCN.

Family Origins – Many of the Kabirizi family members were originally part of the Zunguruka troop, led by a silverback of the same name. They were habituated in 1994 in Bukima. Following the death of Zunguruka due to old age, his son Ndungutse became leader until he was killed by poachers in 1997. The troop continued its legacy with Buhanga, son of Ndungutse, at the helm. Those responsible for Ndungutse’s killing were arrested and jailed.

Kabirizi Challenges – On the 2nd February 1998, Buhanga was killed in a clash with Kabirizi, after which the troop was briefly led by matriarch Nsekuye. She later died on 1st April 2010.

Kabirizi Prevails – In February 1998, the group came under the leadership of Munyaga, a solitary male with family origins unknown. However, several clashes eventually led to Kabirizi taking all of Munyaga’s females.

Bageni Challenges – Between 1998 and 2012 Kabirizi’s family expanded to 36 members. It was at this peak that the silverback’s dominance was challenged by Bageni, Kabirizi’s son, the former leaving with 21 individuals.

The Kabirizi Family Today – Despite Kabirizi’s troop shrinking dramatically as a result of the feud, the Kabirizi family grew again to 24 members between January 2013 and March 2020.

Family Origins – Bageni became a silverback in 2010 and remained with his father, Kabirizi until 2013. A number of confrontations between the pair resulted in Bageni emigrating with 20 individuals to form his own troop on 27th January 2013. Of the 20, eight were females, including his mother Mapedo and the sexually mature Kamoso. Bageni also took with him a silverback named Kanamahalagi and a male subadult named Ntamuvulira.

Sumounting Kabirizi – A further interaction with his father in January 2015 resulted in Bageni acquiring another female, leaving just three females in Kabirizi’s troop.

Clashes with Willungunla – In May 2019, Bageni feuded with Willungunla, the head of a family of 40 that was being habituated. Bageni eventually triumphed with the addition of two adult females.

The Bageni Family Today – Between 2013 to March 2020, the Bageni family has had 19 births and six deaths, expanding to 36 members, of which three are silverbacks.

Family Origins – The silverback Mapuwa belonged to the family of his father, Rugendo, until 1995. In August that year, he abandoned his family, along with his brother Ruzirabwoba to become a solitary male. The instincts which drove him away failed to reap immediate rewards, with Mapuwa having to wait three years for the chance to become a dominant silverback. Finally, after several clashes with Lulengo, he acquired two adult females to start a small troop.

Mapuwa the Aggressor: a year later In 1999, Mapuwa initiated confrontations with the Kwitondo and Rugabo families, leading to a further four individuals joining his troop.

Rapid Expansion: from 2000 to 2009, the troop size more than doubled to 15 members through births and migrations from other families. From 2010 to March 2020 the troop grew still further to around 22 members.

Mvuyekure Challenges: In 2017 the ageing Mapuwa lost the leadership of the family to a silverback known as Mvuyekure. Mapuwa was temporarily exiled before returning as a subordinate silverback.

The Mapuwa Family Today: the family currently consists of 24 individuals, including the two silverbacks Mvuyekure and Mapuwa, the former being the undisputed leader. Family Origin – Along with the Rugabo and Zunguruka families, the Rugendo troop was one of the first families to be habituated in the Jomba area in 1984. From 1984 to March 1998, the family increased from ten to 18 members, before splitting in half in December 1998 following a clash between Rugendo and his son Humba. In 2001, Rugendo was tragically murdered by a rebel group in the Bukima area, at which point Senkwekwe, son of Rugendo became the dominant silverback.

Senkwekwe Massacre – The young silverback Senkwekwe led the troop until  2007, when he and five other victims were brutally slain. The motivation was thought to be ranger intimidation.

Hope from Tragedy – Without Senkwekwe, the remaining five gorillas persevered, leaderless. In 2009, Virunga opened the world’s only mountain gorilla sanctuary, mountain gorillas orphaned by poaching or conflict. It was named the Senkwekwe Centre.

A New Leader – Once tracking was able to resume in 2008 after prolonged conflict in the region, a previously solitary silverback named Bukima was spotted leading the troop having discovered it leaderless.

The Rugendo Family Today –Between 2010 and 2020, the family grew from seven to 11 members, registering six births, two emigrations and four deaths. Bukima has remained the troop’s leader throughout that time.

Family Origins – The original leader of this family was Rugabo (also known as Marcel by the habituation team). In 1994 the silverback, along with two females, were brutally murdered during an attack in which a young gorilla known as Mvuyekure was kidnapped. The poachers, whose motive was to sell the juvenile in Uganda, were subsequently arrested and jailed. In the aftermath, Lulengo assumed leadership of the twelve remaining members of the troop.

Clash with Mapuwa – In 1998, Lulengo had multiple clashes with Mapuwa, which led to a number of gorillas migrating to Mapuwa’s family.

The Lulengo Family Today – From 2010 to March 2020, the family grew from six to eleven members, registering seven births, one death and one migration. Family Origins – Before 1998, Munyaga was unhabituated, and therefore not tracked regularly. He was already known to researchers, having had several interactions with the Buhanga family, which resulted in some of its members joining Munyaga. This included two brothers, Kasole and Mawazo, who are now silverbacks in the Munyaga troop. Habituation has allowed the family to be better understood and revealed an interesting family member: Kadogo, the only known gorilla in the Mikeno sector world to have a bald head.

Family Decline – From 1998 to 2002, the troop’s numbers dropped from twelve to six members as a result of multiple clashes with other families.

Munyaga’s Disappearance – Munyaga disappeared completely between 2007 and 2008 whilst his home range was occupied by CNDP rebels and unable to be monitored by park rangers. During this time, Mawazo became the dominant silverback.

The Munyaga Family Today – Mawazo remains the leader of the family. Since 2010 he has overseen the troop’s expansion to ten members, with five births, no deaths and one emigration. Family Origins – In December 1998, the Humba family was born out of continuing confrontations between Humba and his father Rugendo, resulting in the Rugendo troop splitting into two equal halves. The blackback Nyakamwe left with his brother Humba and eventually developed into a silverback.

Troop Expansion – From 1998 to 2009, emigrations and births were offset by just one death to increase Humba’s troop size to seventeen individuals.

Clash with Nyakamwe – In April 2014, internal clashes between Humba and Nyakamwe led to a division of the family. Humba retained six members while Nyakamwe departed with the other nine.

Clash with Munyaga – In February 2015, the Humba family was joined by the adult female Kakule following a confrontation with Munyaga. The Humba Family Today: Since 2014, the family has registered several births and recorded only 2 deaths. Currently, a struggle is ensuing between Humba and his son Mahundure for leadership of the thirteen strong troop. Family Origins: the year 2014 saw the inception of the Nyakamwe family. The silverback of the same name was originally part of the Rugendo family with his brother Humba. When the family split in 1998, Nyakamwe followed his brother to form a new troop as a subordinate male. Following several confrontations between the two brothers in 2014, a further family division took place on 5th April, leaving Humba with six individuals and Nyakamwe with ten.

Clash with Kabirizi: on 20th August 2015 a confrontation with Kabirizi led to the migration of the adult female Kabila to Nyakamwe’s troop

The Nyakamwe Family Today: from 2014 to March 2020, the family has registered six births, three deaths and one migration, increasing the family size from ten to 14 members